Art at the Astrodome
By Rachelle A. Omenson
September 6, 2005

10,000 people, one stadium, and nothing to do. I have a hard time waiting between commercials for a television show to come back on. It seemed unimaginable that these patient people might have to wait months, god forbid years, to regain some structure in their lives. Of course, after wading in contaminated water or clinging helplessly to your roof shingles, boredom and rest are welcome respites.

However, children bounce back quicker than some adults. Or at least they may not realize the depth of the disaster that they have just survived until they are much older and those shadowed images creep back into consciousness. It was the children who ran giggling and racing up and down the aisles of cots at the Reliant Astrodome in Houston, yelling back to their mothers and fathers, “I’m right here!” Their energy seemed boundless even in the face of tragedy. If there were no images to go with these jubilant yells, it might be another birthday party at Chuck E. Cheese or McDonald’s Playland. At those venues, however, the kids are whisked back into the minivans stuffed with too much pizza and sugar. Here amid relief workers, chronically ill elders, hundreds of police, and exhausted parents, the children only have their nylon cots to go back to.And that gets boring.

I wondered on the Friday night after Katrina hit New Orleans, what people could possibly do to help those in need since donations were no longer needed. Literally, tons of food, water, and clothing had been donated and were being sorted through on the loading dock behind the Reliant Center in Houston, Texas. Hundreds of volunteers were continually needed around the clock but I didn’t know specifically what I could possibly do.
6am Saturday morning, I decided not to wonder anymore. There was no plan to this plan because if the fuzzy logic of it didn’t work, I was out hundreds of dollars and a whole lot of wasted Labor Day weekend.

Let me back up for a second. For two years, I have been enrolled as a graduate student in an Art Education program in Philadelphia. For two years, I have heard the mantra of world-based art, art criticism, art history, and the ever-popular art production. Art therapy is an entirely different field; one that requires extensive psychology-based training. I apologize now to the true practitioners in that field because I temporarily faked being one of you. But I swear it was worth it.
I took the first flight from Philadelphia to Houston on Saturday afternoon and rented a car. The rental car agent gave me directions to the Astrodome and I flew down the Texas highways toward the stadium. After being hustled around to the correct door of the Reliant Center, where the volunteers apply (apparently the west door), I hurried up the escalator toting a carry-on size piece of luggage containing dollar-store versions of sketchpads, crayons, markers, and stickers. The volunteers giving out the volunteer wristbands slapped a peach colored plastic band on my wrist and sent me off. I was supposed to sit through a short orientation lecture but I was only going to be there for 2 days and I didn’t want to waste time before being allowed into the Astrodome. I crossed the street and confidently told the guard at the gate that I was the volunteer art therapist. Clearly this sounded logical because she yelled over to the other gatekeeper, “Open that gate over there, the art therapist is here.” Okay, that actually worked.

I walked through and just looked down. It didn’t even look like people, just a moving carpet of rectangles. I was slightly concerned that I would be caught as some art fraud so I quickly moved away from the guards but realized that everyone involved in this drama was happy to have anything positive happening at all. And how can art not be positive.

I wandered through the darker concourses where typically during an event at the Astrodome people would be buying popcorn, hotdogs, and beverages. But now, cots lined the walls, crowded by precious possessions and newly acquired relief items like clothes and shoes. It was darker up here in the concourse, not like the eternal daytime of the floor of the stadium. Even at 11pm, when the lights dim, it’s not really dark.

“Hello, I’m the wandering art teacher. Does anyone want to draw?” I said to the first awake group of kids I saw lounging on the cots up there. Surprisingly, they ran over to a nearby table laden with packaged snack food, and slid them aside as I removed boxes of crayons and markers from my vest and sketch pads and construction paper from the wheeled luggage. They never asked why I was there. They never said they were too tired to draw anything. They never looked suspiciously at me for one minute. They only asked if I also had any clay. In a fluorescently lit, dirty concourse in section 432, we set up art class. They called me teacher and raised their hands when I asked them questions. They signed all of their artwork and volunteered endless information about their experiences in New Orleans. I asked them to draw whatever they wanted and not surprisingly most of them drew houses, specifically houses surrounded by water. A fifteen-year-old girl, Sjor’Monique Windbush, drew a sign of sorts. In different colored bubble letters, it says From our New Orleans home to the Astrodome…Because of Hurricane Katrina. And it has the official hurricane symbol underneath. The back is signed with her name, age, and refugee of New Orleans, La. A few of the others drew before and after images of their homes. The after images not only contained swirling water marks but also mean-looking sharks and snakes and suns with sad faces. Apparently, there was a rampant rumor that the aquarium in New Orleans was going to burst and man-eating animals were suddenly going to be freed and swimming into their homes and streets.

When it became too late that first evening and I didn’t want to bother sleeping residents, I went back to the hotel across the street and sat momentarily shocked at what I felt. In three more days, I was scheduled to begin student teaching at an elementary school in Pennsylvania. How on earth am I in Texas?
The next morning, I stopped at Target to get the requested clay and with my wristband wandered straight through those gates and down onto the stadium floor. This time I carried with me a neon pink piece of poster board and wrote “The Art Room” on it, duct-taped it to the suitcase handle, and spread the supplies onto a large open space on the floor. Virtually seconds later, some children were standing there with gigantic eyes wanting to touch everything. But they didn’t. They asked first. Just like in school. And again, they called me teacher. They drew houses again, But they drew spiderman too. And the real little kids drew swirly stuff that could’ve been water, but it could have been their mom. It didn’t really matter. They molded clay into crosses, into balls, and into snake shapes. And they did one thing that is rare even in the most well stocked art room. They cleaned up. It was like they needed structure in a sea of chaos. A 15 year old boy, Alferd, took 3 more cots and arranged them in a u-shape in front of the piece of luggage with the sign and created a squared off area for creating art. Another 10 year old girl, grabbed a broom and started sweeping when the crayons got out of control within the square. I picked up my video camera and recorded a 9-year old girl saying, “I’m Sh’anta, I’m in art class and I like it.”

For the rest of Sunday afternoon, we all stayed in and around the square in the center of the Astrodome. A choir showed up to stand in the bleachers and sing for two hours. In our square, there were colors, there was music, there were imaginary houses, and there was a teacher here. So it was ok. For Sunday afternoon.
I didn’t have a good answer for the kids when they asked if I would be back tomorrow. Their faces dropped when I told them I had to come back to Philadelphia; it was like I said Guam. The worst part however, was when I had to walk away with the suitcase, leaving behind all of the supplies. All those kids wanted was to know that something familiar would be there when they got back from eating, or showering, or checking the board of missing people with their parents. And now I had to leave too.

I believe wholeheartedly that our art room in the Astrodome helped those children find structure, familiarity, and calm at least temporarily. It was comforting to hear that a real activity room was being set up for the young residents on the day I was leaving and that school would officially be underway the following week.

On the plane ride back home, I sorted through the drawings that the kids had given me and tried to mentally put names with faces. My own private hurricane of unease ran through me. Did I hit my art educator peak just one day before starting to student teach? Is anything ever going to live up to doing art in a football 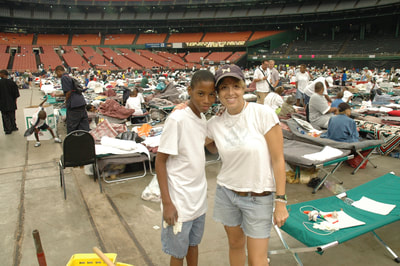 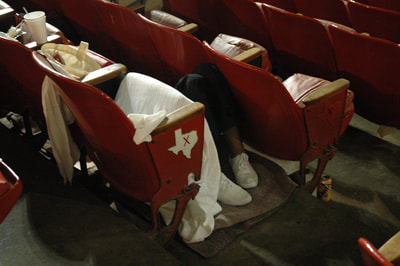 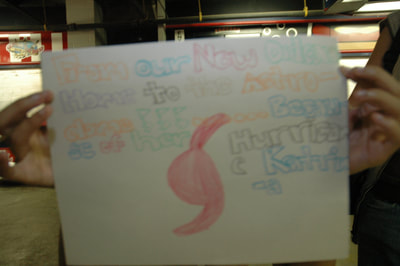 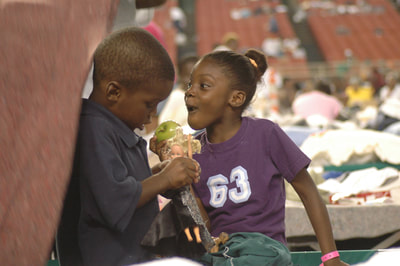 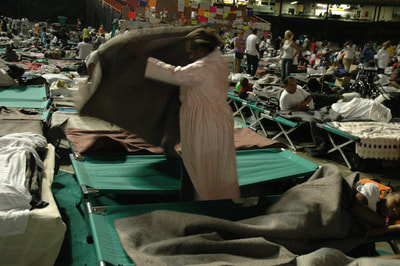 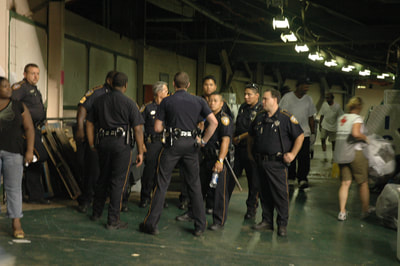 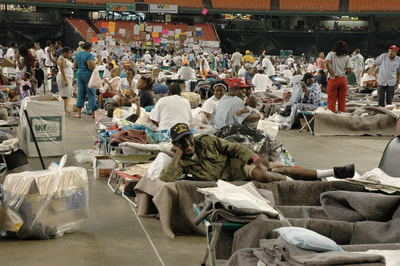 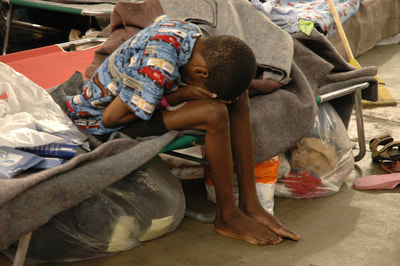 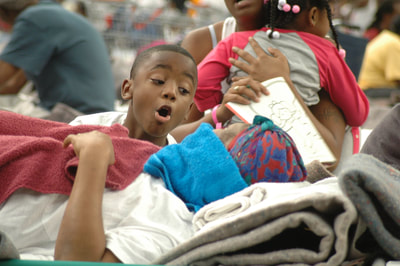 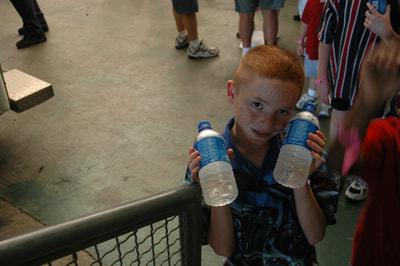 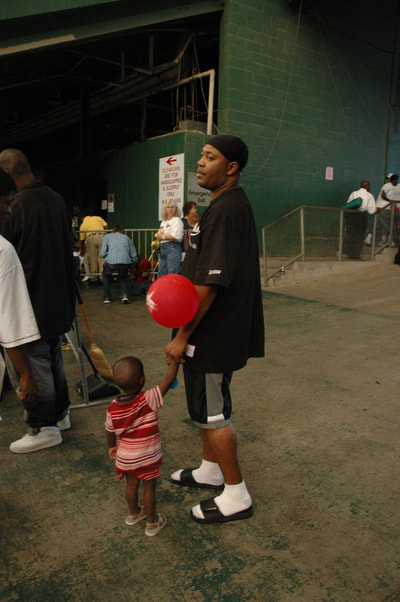 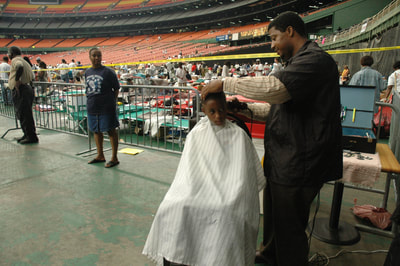 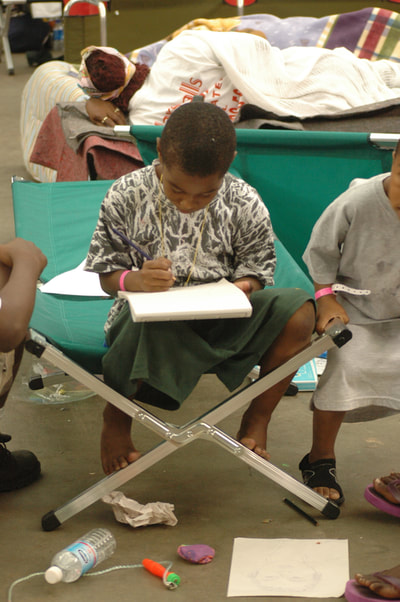 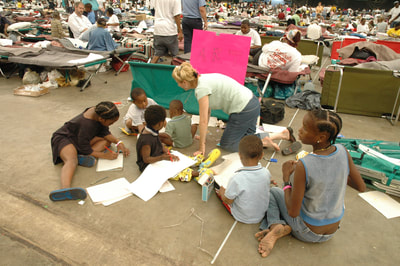 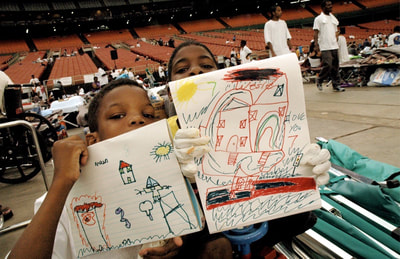 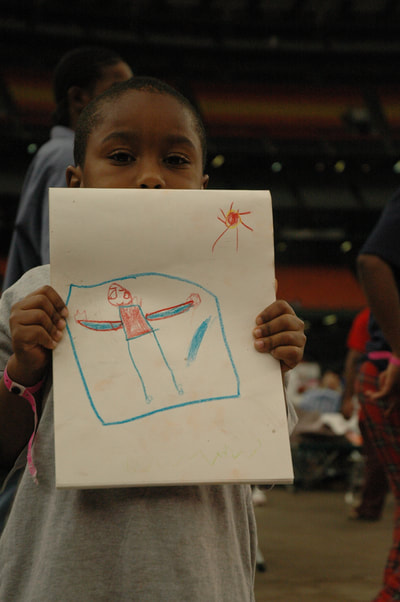 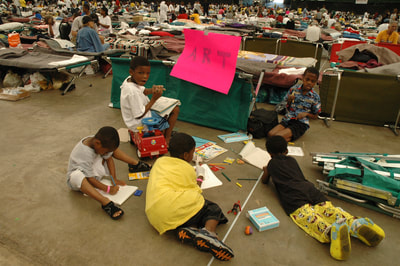